“We are girls! We are women! We are strong!” – European Commissioner Gabriel to winners of the 2019 European Ada Awards recognising top female digital talent in Europe

“Take all challenges as opportunities,” advised Ms. Mariya Gabriel, European Commissioner for the Digital Economy and Society, to a group of wide-eyed finalists at the sixth European Ada Awards ceremony organised on 16 October 2019 in Brussels as part of European Code Week and the WomenInTech.Brussels Women Code Festival. The Ada Awards, founded in 2012 by Brussels-based Digital Leadership Institute, promote top girls and women in digital fields in Europe in an effort to increase their numbers, a long-term priority for Commissioner Gabriel that she will carry into her new mission as European Commissioner for Youth and Innovation starting next month. 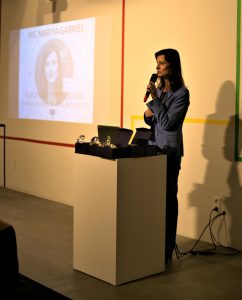 Commissioner Gabriel officially opened this year’s celebration of the Ada Awards, affectionately named for Countess Ada Lovelace, the world’s first-ever computer programmer, with a message that technology is “a strategic tool for the empowerment of citizens—of women and of men—that we must continue to use to advance ourselves,” she said. The Commissioner counseled those present to spend less time on embellishments and to focus on taking action when a door is opened, saying she would both hold them to task, and committed to supporting them along the way. The Commissioner closed her message praising the hard work and talent demonstrated by the Ada Award finalists and winners, underscoring: “We are girls! We are women! We are strong!”

The 2019 European Ada Award for Digital Woman of the Year was presented by Ms. Kelly Dorekens, CRM Director at Deloitte Belgium, who shared that “diversity in a group matters as much as ability and brainpower,” adding that Deloitte “actively encourages women to embrace science, technology, engineering and math through selected partnerships and events, like the Ada Awards.”

Ms. Dee Saigal, United Kingdom – 2019 European Digital Woman of the Year
Ms. Dee Saigal is Founder, CEO and Creative Director of Erase All Kittens, an adventure game designed to give girls the confidence to code, whilst teaching digital and 21st century skills. Dee’s goal is for EAK is to transform the way children perceive coding and engineering, and empower millions of girls worldwide with transferable, digital skills. Dee shared that her biggest challenge so far, aside from being a woman in tech, has been fundraising for research and development. Her message to other women and girls is to not think tech is for boys or that it is “geeky.” “There are so many amazing careers in tech that are both interesting and challenging,” says Saigal. Now that Erase All Kittens has 150,000 players, her next step is to raise investment in order to be able to build more educational and gamified version to launch globally. Her team is raising £500,000, and are already at twenty percent of that goal. 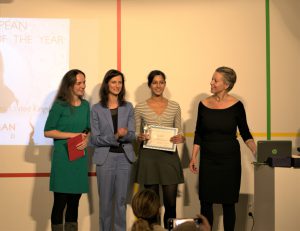 Tayra, from Bulgaria – 2019 European Digital Girl of the Year “10 Years and Under”
Tayra is ten years old and was born in Sofia. She loves coding, and most recently won a special prize at Softunjada Kids with her Scratch project “three bears fairytale,” using sign language for kids. Tayra says the projects she is most proud of are her webpage and her robots. In ten years, she hopes to be a programmer. Her message to other girls who are interested in tech is: “I believe that girls have a power, and the power of technology can change the world for the better, no matter who we are. It is never too late or too early to get involved in tech,” Tayra says.

“11-14 Years Old” Category:
The 2019 European Ada Award for Digital Girl of the Year in the “11-14 Years Old” category was presented by Ms. Christine Marlet, Board Member, Global Wo.Man Hub. Marlet expressed her awe of the candidates saying “the Ada Awards grant the participants the perfect opportunity to enhance their digital dreams. It encourages them to take risks along the way in order to achieve their digital goals because they believe that their objectives are attainable.” She added: “Belief in yourself stems from belief in your role models.” Winner in this category was Selin, from Turkey.

Selin, from Turkey – 2019 European Digital Girl of the Year “11-14 Years Old”
Selin is thirteen years old and loves building robots, coding, animals and travelling. She wants to study robotics and eventually build a humanoid. Selin shared that she was inspired to build her robot dog when her childhood dog passed away. She said “I knew that blind people especially have a strong connection with their dogs. I wanted to help them out, and felt like this was a great way of doing that.” She spends her free time on the weekends working on and improving her robotic guide dog. Looking forward, Selin says “I am currently developing the second version of my dog, and this one will be able to sit, lay down, bark, and it will even do ‘heart eyes’ towards my mom. Currently it’s only programmed to understand English, but I’m hoping for it to learn Chinese soon!” 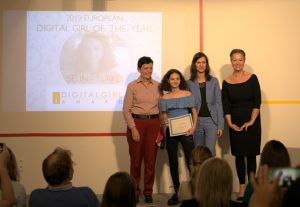 “15-17 Years Old” Category:
The 2019 European Ada Award for Digital Girl of the Year in the “15-17 Years Old” category was presented by Ms. Viola Pinzi from European Schoolnet. There were two winner in this category: Anne, from Belgium, and Alai-Miranda, from Spain.

Anne, from Belgium – 2019 European Digital Girl of the Year “15-17 Years Old”
Anne is a fifteen-year-old girl who created Clinicoders, an initiative to bring technology and programming to children in hospitals. One of the goals of this project is to encourage children to create solutions for permanently disabled children. Anne said her next steps for Clinicoders are to bring it to a hospital in Antwerp, as it is only currently in Ghent, Belgium. “My dad wants to help bring it to other countries as well. So we’ll see where it goes,” she said. Over time, Clinicoders has developed from an application for children into something for adults too. “We shared this application called ‘Mindstorms’ to adult hospital animators, and it has been a real success.” In terms of her own future, Anne plans on studying law, but definitely wants to continue engaging hospital patients with Clinicoders.

Alai-Miranda from Spain – 2019 European Digital Girl of the Year “15-17 Years Old”
Alai-Miranda’s passion for STEM began when she was seven years old, and it has yet to fade. Most recently, she was invited to speak at the Amazon Web Services Summit in Madrid to discuss her experience as a girl in technology. Alai-Miranda shared about a new project she has begun to work on called “EsVuela.” A combination of the Spanish words “escuela” (school) and “volar” (to fly), the project will educate children on how to fly and program drones. As far as where Alai-Mirand sees herself in ten years, she says: “Hopefully I will have graduated from MIT and will be working in technology at a company, or maybe I will have even started my own company at that point. I hope to be either in the U.S., or maybe in Europe, maybe even still in Spain – somewhere!” As for her experience at the Ada Awards, she said that she feels “inspired to continue talking about and learning technology.” 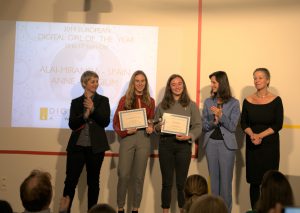 “Gender-Equality and Europe: Fit for the Digital Era?” Panel

Christian Veske kicked off the panel with a discussion of EIGE’s 2019 Gender Equality Index released this week, the factors contributing to Europe’s score of 67 out of 100, and the increasing importance of promoting gender balance in digital fields. “Women won’t achieve equality until there is digital equality,” agreed Schaart from the GSMA. “Right now, women hold less than twenty percent of jobs in the tech industry, which is why GSMA expanded our Tech4Girls program this year.” 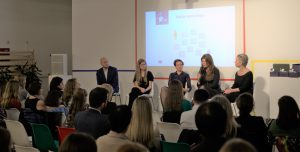 At sixteen, Manon Van Hoorebeke shared that winning the Digital Girl of the Year award at eleven years old has played a significant role in guiding her life choices since then, and that she is now studying Physics at university. Van Hoorebeke also admitted that a lack of confidence with technology is a barrier to getting more young women into the field, and even despite her accomplishements, that she sometimes faces self-doubt. Elias concurred that this patter appears in professional contexts as well for which reason, she said, Deloitte works to identfy high-potential women in digital fields and starts conversations with them on leadership. “Because it is often unlikely that women will initiate these discussions themselves,” she said. 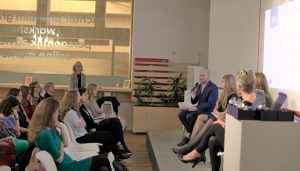 Formal welcome for the 2019 European Ada Awards Ceremony was provided by Ms. Loubna Azhgoud, COO of Women in Business and WomenInTech.Brussels @1819 Hub, and by Ms. Audrey Scozzaro Ferrazzi, Senior European Policy Manager at Google. Azhgoud congratulated Ada Award finalists and highlighted the event in the context of the third-annual Women Code Festival organised by the Brussels Region, which succeeded this year in reaching 2300 participants, eighty percent female, to encourage them into digital fields. Scozzaro Ferrazzi also welcomed guests with a rousing speech expressing her awe and admiration for gathered laurates who, like her, are pursuing digital fields.

Following the ceremony, WomenInTech.Brussels provided a lovely reception for the finalists and winners of the 2019 European Ada Awards and all their friends, families and supporters. 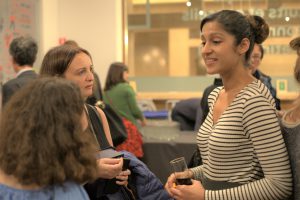 Congratulations to the 2019 European Ada Award winners, finalists and nominees for their amazing leadership in digital fields across Europe!

Thank you to our Ada Awards sponsors and supporters!

You can find more pictures from the 2019 European Ada Awards ceremony here.